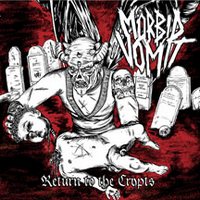 With all the need to go ‘old school,’ it’s more refreshing for bands that attempt that sound to try to keep a little bit of the more modern approach to give it some contrast and freshness. Bands like Bloodbath keep it old school, but without feeling dated. Finland’s Morbid Vomit falls into this camp as well, bringing the ole evil sound of death metal without feeling like they are rehashing Entombed for the millionth time.

As mentioned, Bloodbath is a good jumping point for Morbid Vomit. It’s old school death metal without question, and focuses on that blend of sinister melodies with a mostly mid-tempo crunch. “Engulfed by the Plague” is a good representation of the album itself. Some heavy, stomping riffs are front and center and never speed up too quickly. There’s some enjoyable melodies to be heard and the riffs will stick in your head. Then there are the vocals. The vocals of Morbid Vomit deserve some credit, because they don’t go for the usual rip-offs. If anything, vocalist Ville Ryöti sounds more like Jan-Chris de Koeijer of Gorefest in their earlier material. It’s a powerful roar that stands out.

It should be noted that Return to the Crypts is a compilation of sorts, merging together the band’s previous demo, EP, and an interesting death metal cover of Ghost’s “Prime Mover.” While there’s no “real” new material (sans the cover), it’s reasonable to assume that this will be the first exposure to Morbid Vomit for many and it’s worth checking out. Solid and genuine death metal; may their new material reach our speakers soon.