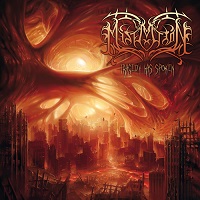 Third albums typically separate the mainstays from the contenders. In a life cycle of a band – particularly if the essential songwriter components remain constant – the first album showcases the initial influences of a group, while the second album begins to establish your own niche. If the stars align, the creative benchmark occurs with the third record- and we’ve reached that juncture in this Miseration’s death metal band’s career.

Vocalist Christian Alvestam (ex-Scar Symmetry) and guitarist Jani Stefanovic (Essence of Sorrow) formed Miseration as an outlet for their vicious brand of uncompromising death metal – looking at the movement from both the North American and their own European roots. Tragedy Has Spoken lays down 10 more tracks and 42 minutes of roaring larynx work, thick riffs that carry slight hook nuances without compromising for commerciality sake and then a rhythm section willing to go up and down the tempo register as the arrangement calls for.

“Ciniphes” for instance, contains an eerie, atmospheric keyboard break about 3:29 into the song

that continues to its 4:51 conclusion, yet prior to this the Stefanovic/ Markus Bertilsson axe team alternate between mid-tempo death lines and speedy picking through eight string guitar use that almost makes Miseration approach black metal blasting territory. “Disaster Cage” unleashes another series of stair step charging riffs, the song an amalgam of Monstrosity-like tenacity against Bloodbath-meets-Edge of Sanity dynamics, while the follow-up “On Wings of Brimstone” contains small tinges of Alvestram’s good cop clean delivery in the chorus, while the lead break features high-pitch jackhammer tapping action.

The quintet won’t re-write the death metal textbooks with Tragedy Has Spoken, yet Miseration understand that their fans want aggressive songwriting that leaves all daily stressors on the table. May the incessant hair windmill action commence…and I believe Miseration will have no problem sustaining a decent studio inventory as the years roll by.