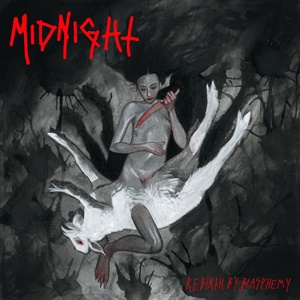 Ascending to a well-regarded label like Metal Blade thanks to the underground push and support of Hells Headbangers for the previous three full-lengths, it’s evident Midnight climb the metal path on their own terms. One look at the discography and you’ll see a host of EP’s, singles, split, and live releases – Athenar the lone musician in the studio, and seeking out the proper support from fellow musicians on the stage. The fourth album Rebirth by Blasphemy is an exercise in using a bigger platform to achieve greater awareness, never compromising the blackened speed metal platform that has been a constant from the start.

Raspy vocals and crusty overtones penetrate these ten tracks – intertwining influences that come from an aesthetic of passion and power, channeling those early years of Venom and Motörhead most notably. Occasionally veering into melodic NWOBHM territory with catchy guitar runs and refrains, a track like “Escape the Grave” has that steady slamming rhythm and incessant crushing foundation that almost makes it a long-lost Defenders of the Faith / Judas Priest effort. When Athenar chooses to push the accelerator there are moments of unbridled angst against some titillating wah-wah solo activities, as if Venom was reigned in just a touch for “Devil’s Excrement”. The balance of speed and mid-tempo arrangements helps the listener absorb this material fairly quick – a mid-paced “Rising Scum” with its lumbering march tempo equally as engaging as an early NWOBHM-oriented “Cursed Possessions”, Athenar using panning/reverb on his voice during the chorus to elevate the haunting nature. Nothing extravagant in terms of sophisticated play, Midnight succeed in keeping the focus and execution on target – all the songs hitting that two to four-minute and change barometer when you need to move forward without draining your audience.

Rebirth by Blasphemy should gain Midnight even more of a foothold in the blackened speed/heavy metal community, as well as not losing the underground hordes who’ve been praising the band since inception. An exciting chapter where they’ve been able to spread their message on their own terms, and hopefully keep gaining momentum as a result. 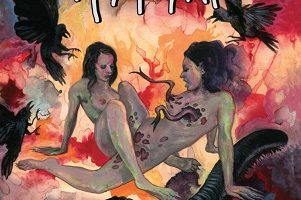