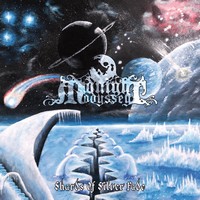 I, Voidhanger Records puts out some of the best, most captivating and impressive atmospheric black metal out there today. It seems to make sense that some of these acts are of the one-man variety, as the music tends to be wildly expressive, vast, and have a singular voice and direction in a way that traditional lineups might not always produce. Noteworthy acts such as Mare Cognitum and Spectral Lore count among the ranks and also, of course, the one-man dynamo that is Midnight Odyssey.

Midnight Odyssey is Brisbane, Australia-based Dis Pater’s vision, and also mandatory listening for the fan of atmospheric black metal. Funerals From the Astral Sphere is the 2011 debut, and it’s a jaw-dropping expanse of enveloping music that represents some of the most excellent atmo-black in existence, no doubt about it. What must be stated here (as any other review of Dis Pater’s music will) is that these albums are quite long. Both releases are double albums, the former clocking in at two hours and five minutes, and this latest, Shards of Silver Fade, coming in at a staggering two hours and twenty-three minutes. If you can find the time, the payoff is mighty worth the commitment. Truly, the only potential knock that could be understandable regarding this music may be length. But with things nicely segmented into two discs, digestion is significantly aided.

So, what’s the sound? This is unique stuff, and I haven’t a comparison to another band in mind, which is an unusual and complimentary note. This music is intoxicating, engrossing, immersing, and exhausting. The core is, of course, black metal – but it is awash in copious amounts of synths, layered endlessly, as well as shimmering reverbs which create massive headspace. Strings of all kinds (guitars, harps, harpsichords, orchestral ones) lead the music down rivers of dream-like atmospheres. A pretty relaxing listen, as a whole, this atmo-black metal comes close to having New Age feel, as demonstrated on the almost Enya-like sounds of “Darker Skies Once Radiant”. Other leanings outside of the norm venture into the post-punk/new-wave arena, on the album’s title track.

Clean vocals dominate the album and work well with overall flow, one with cinematographic expanses of cosmic worlds on display. Not to say it doesn’t get heavy, it does, but in well-placed moments. With an album of this scope, it is interesting (and refreshing) that the production is a bit old school. You wont find hyper-saturated drums and guitars pushed to the top on this music.

Midnight Odyssey is a gift to the genre and comes highly recommended. While this latest effort may not eclipse the quality of the former, it really remains to be seen. Shards of Silver Fade is a majestic, if overabundant achievement.