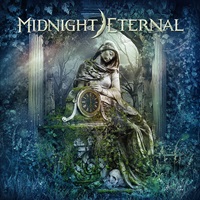 Although the lion’s share of headliners in the symphonic metal movement hail from European shores – it’s only natural to see an uptick in United States newcomers wishing to put their creative stamp on the scene for the fans. New York/New Jersey’s Midnight Eternal started in 2014 with project intentions before developing into an active quintet – garnering a lot of buzz early on, proper management through Intromental as well as a label deal with Inner Wound, bringing us to this debut, self-titled full-length.

Midnight Eternal start out of the gates to establish that guitar play is as important as the keyboard parts and layers for “‘Till the Bitter End”, a mid-tempo offering that includes reflective male background support from bassist Greg Manning and an almost Queensrÿche-ish electric buildup towards the conclusion. Ramping up the energy for the speedy follow up “Repentance”, a lot of the double bass and syncopation instrumentally brings to mind classic Sonata Arctica, sure to arouse the power legions. The band occasionally veer into heavier, attack mode through their picking choices and quick semi-blasting snare hits, as the verse riffs for “Shadow Falls” showcase an extreme nuance, while Boris Zaks and Richard Fischer engage in a keyboard/axe neo-classical break workout to behold.

Raine Hilai as a singer has a versatile voice: angelic and occasionally pop-oriented, her presence will captivate most to the good. She glides effortlessly through the more energetic, bombastic title cut while handling a throwback, pop-like affair on “Silence” as the doubled up harmonies bring out the Abba/Queen comparisons, elevating the mood and should have audiences bouncing happily when airing this number live. A difference maker as well is the epic closer “First Time Thrill” – at 9:05 there are small instrumental buildups but for the most part the arrangement has proper flow and construction plus another emotive solo that retains melodic integrity from Mr. Fischer, aligning well with Eddie Van Halen, Richie Blackmore, and others of that classic mold.

Midnight Eternal meld together a lot of the power/neo-classical sheen of acts like Kamelot, Symphony X and Stratovarius, while also taking into account a more song-oriented, focused approach (brevity key as over 75% of the record clocks in at 4:30 or less) that pushed Within Temptation and Nightwish to the top. Jan Yrland’s art expertise and Tommy Newton’s mixing/mastering knowledge give the band a total professional final product. Overall, a great start and proof that this particular sub-genre is sprouting exponentially stateside. 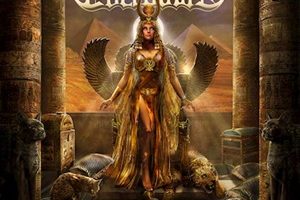