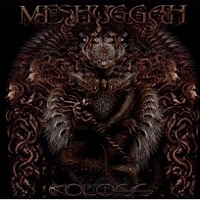 Essentially in an unwinnable position, Meshuggah at this point, have been so ripped-off, copied, stolen from, aped, pillaged, and downright plagiarized that fresh material from them sounds like rehashed material from someone else. Someone less worthy, that is. The entire djent movement is to blame, where the band’s once-innovative staccato riffing style has been eating away at like vultures feasting on highway roadkill. In essence, all of the above forced the Swedes to make the left-hand turn that is Koloss when the band should be reveling in topsy-turvy rhythms. Instead, the album never really gets off the ground.

For starters, there’s no “Bleed” on Koloss, which was basically the lone shining moment on 2008’s messy obZen. Said song

is perhaps the most prominent metal song to cross anyone’s ears in the last decade, and should have been a harbinger for future Meshuggah creations. ‘Tis not the case, for the band gets stuck in the stop-start, tempo-devoid “I Am Colossus” (the album’s opener), as well as on “Do Not Look Down,” which boasts an opening riff that is oddly similar to one of Slipknot’s numerous audio abortions.

On the flip-side, it’s hard to deny the brutal and swirling “The Demon’s Name Is Surveillance,” where drummer Tomas Haake turns in another first-rate performance. In fact, it is Haake who turns out to be the album’s key player, messing with time signatures, and even going for all-out speed on “The Hurt That Finds You First,” which might be the band’s fastest song since the mid-90’s.

The big problem here is that Meshuggah knows how to put together a memorable, hook-based song, but seemingly want nothing to do with it. The clunky “Behind the Sun” is a total drag (in the most literal sense), as is “Break Those Bones Whose Sinews Gave It Motion,” where the very hoarse-sounding Jens Kidman pulls the entire operation down. Point being, the Swedes were once able to wrap a swift chorus around mesmeric chugs and rhythms (see:Destroy.Erase.Improve and Chaosphere), but none of that is to be found here.

We won’t call Koloss a disappointment, yet it’s hardly indicative of what Meshuggah is truly capable of. As noted above, a lot of this could be attributed to over-saturation and the fact that Meshuggah can’t be Meshuggah any longer. What can one do when everyone has stolen your sound? Guess the answer is Koloss, right?