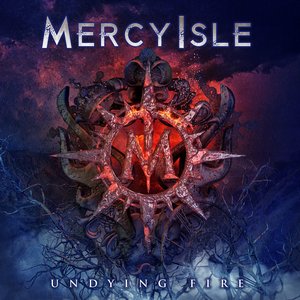 Falling into the same sweet spot of bands like Delain, Within Temptation, and Lacuna Coil, the American/Dutch symphonic act of Mercy Isle practically has a built-in fanbase ready for the taking. Of course, that implies that the band has the chops to pull off the sound – as there are many who try to pull in the European symphonic vibe with more American rock flavor and end up with a balance that doesn’t work in the band’s favor. Rest assured, that does not happen with Undying Fire.

If anything, Undying Fire is successful because it doesn’t rely upon one formula, or by simply tossing out catchy vocal-laden melodies on top of subpar music. Rather, Mercy Isle attempt different tactics as the album progresses, keeping the listener engaged and waiting to hear what’s coming at the next juncture. “Wake Up” may start things in a familiar manner (particularly for fans of bands noted above), but then “Storm” ushers in heavier grooves and “No One Will Save You” ups the ante with growls and more pre-dominant male cleans. The progressive melodies of “Come to Me” rank as some of the album’s best, with upbeat synths and soaring riffs spiraling together, culminating in some standout leadwork towards the song’s middle. There’s a lot to enjoy, and yes, even two softer tracks, “If I Could” and “Saying Goodbye,” with the later (which features Amanda Somerville) really nailing the balance of sentiment and power. Even with these two tracks focusing on Kassandra Novell’s vocals, it’s clear that there’s an impressive group of musicians putting forth an equally impressive structure behind her.

There’s some tough competition in the symphonic metal front, but Mercy Isle prove themselves worthy of an audience with Undying Fire. They’ve got all of the right ingredients and aren’t afraid to set themselves apart from the crowd, which should play to their favor in the long run. An easy album to get behind for fans of this particular sound.