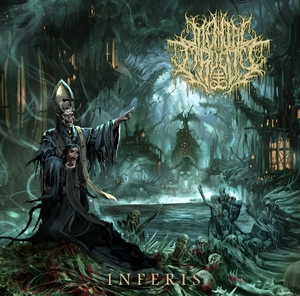 For whatever reasoning, for every bludgeoning ass-kicker death or tech death metal release that Unique Leader puts out, they seem content to match it with a generic, deathcore act of the week. This time we experience Mental Cruelty in this said spot, with their second album Inferis. A quick turnaround from their first full-length, Purgatorium, on Rising Nemesis Records, there’s unfortunately not much to distinguish it from the rest of the modern deathcore pack.

Like a growing number of deathcore acts, Mental Cruelty focus on breakdowns and ‘in your face’ vocals. The vocals are well done for the style, but sadly sound no different than many other acts of the same variety – a solid range but there’s just no personality behind them. The same statement could be made for the rest of the material, as it moves from breakdown to breakdown (yeah, there’s quite a few) with some speed runs peppered in to amp up momentum before slowing things to a halt. Some solos do spice up the landscape (check out “Mundus Vult Decipi”) but it isn’t enough to really save the near-perpetual battery of breakdowns and blastbeats. Some light attempts at atmosphere are there, particularly on the closer “Monocerotis,” though by that point it almost feels like too little too late. For those that are into the deathcore sound, the guitar tone is good – plenty of heaviness that rears its head, especially at the mid-tempo range. But again, nothing that sounds remotely different from bands like Within Destruction or Acrania.

If it’s only deathcore you crave, then you will probably find no fault with Mental Cruelty. But there’s simply too much that leans on what every other band in the genre is attempting to do, which means it does little to stand out. Utterly vanilla in execution.