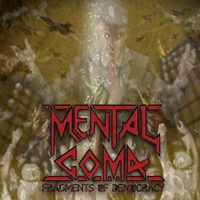 Being a fan of power and progressive music, when thrash hit the scene and developed from a Bay Area scene to a worldwide phenomenon in the metal underground, my tastes gravitated to those who could combine a little technicality and intricacies to the normal speed riffing, savage vocals, and mid-tempo ‘polka swing’ twists. Names like Artillery, Forbidden, and Heathen come to mind as acts separating themselves from the Exodus/Kreator/Testament pack through their twin guitar antics and progressive output which still came hand in hand with melody. Denmark’s Mental Coma align themselves in that semi-technical, heavy thrash mold, as Fragments of Democracy whirls ten tracks of punishing material that take me back to the late 80’s and early 90’s.

On the first few passes, Anton Pedersen’s lead work comes from a neo-classical like slant, not necessarily always in shred mode but certainly cognizant of delivering something above basic energized chaos. Check out his bursts in the two-minute frenetic “Grotesque Reality” as well Forbidden-like precision for the mid-tempo oriented “Scars of Loyalty” to see two sides to his exemplary axe work. The rhythm parts Simon Nedev handles for Mental Coma have this push and pull aspect that recalls what happened when Sacred Reich and Sepultura took command, along with a healthy dose of Sodom-oriented frenzy in the drums and Nuclear Assault-oriented gang vocals for the key shout-out choruses. Tribal drumming sets “Civilized Abuse” off in that whirlwind motion before the stop/start pace galvanizes into another aggressive riff swirl where the vocals match the upward nature of musical intensity – the mid-section certain to set pits ablaze a la Kreator during their Terrible Certainty era.

During the longer numbers such as “Profitable Killings” and eight-minute plus closer “Ashes of Humanity” the quartet get a chance to flex more of their technical muscles, shifting gears as well and incorporating bass play from Mark Klavsen that comes from more of a Steve Harris / Jason Newsted school. Simon doubles on vocals, ripping out the words quickly in sync in more of a Phil Rind manner, clear while vicious for “Mass Media Manipulation” and the zig-zag pounder “The Forgotten Ones”. The only disappointment in the total package comes down to the band logo – hopefully something that can gain a little spruce up as it seems a tad amateurish in comparison to the musical product.

If you tire of the same retro-thrash and need a little more musical bite and potent riffing, Mental Coma through this debut full-length will be the ideal pick me up.