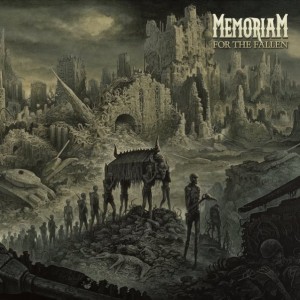 The 2015 death of drummer Martin “Kiddie” Kearns ended Bolt Thrower’s career. Although Bolt Thrower hadn’t released a new album since 2005’s Those Once Loyal, respect and praise for the band only grew in subsequent years, perhaps buoyed by the classic death metal revival of recent years. This brings us to Memoriam, who were formed as a tribute to Kearns. Featuring ex-Bolt Thrower members Karl Willetts (vocals) and Andrew Whale (drums), along with the Benediction pair of Frank Healy (bass) and Scott Fairfax (guitars), the band’s For the Fallen debut ably carries the torch for bulldozing, no-frills death metal.

Bolt Thrower, of course, was the undisputed masters of barreling, war-torn songs, many of which were ungodly heavy while retaining a manner of immediacy. The same bodes for Memoriam, who crush and slow grind across eight songs. Willetts has his classic, grizzled bark in full swing, spouting about atrocities, corruption, and loss. On “Flatline,” he’s simply menacing, as Fairfax’s simple, but churning riffs turn the traditional death metal wheel.

But what For the Fallen really boils down to is Fairfax’s riffs. He’s clearly a student of not only Bolt Thrower’s career, but vintage death metal as a whole. That can sometimes be a deathtrap for certain guitarists–not Fairfax, whose riffs sound fresh (see the death/doom angle of “Memoriam”) and agile (“Resistance”).

With death metal now firmly focused on its vaunted past and roots, the timing couldn’t be better for Memoriam. For the Fallen is a lethal shot in the arm for the scene, a steamrolling body of work that properly carries the Bolt Thrower torch. Kearns would be proud. 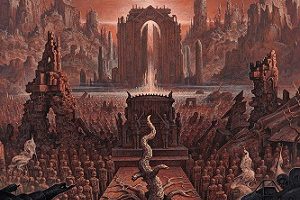