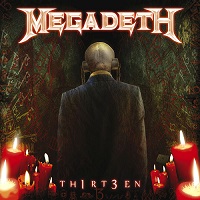 Can’t have a Megadeth album release without some type of drama, right? This time, it’s Mustaine’s near-career threatening neck injury, one that almost kept him out of the Big 4 show at Yankee Stadium this past September. Thankfully, MegaDave is on the mend, and should be in tip-top shape to giveTh1rt3en the promotional push it deserves.

Early reports said this would hover around the commercially-tenacious, but jarringly heavy sound of Countdown to Extinction, and yeah, you could go there. The band stays on the mid-tempo side of the fence, save for “Whose Life (Is It Anyways?)” and “Never Dead,” which (of course) has the album’s best riff at the 1:11 mark. However, Megadeth has been able to thrive in the confines of rock-solid, 4/4 metal, just look at Youthanasia, so in that sense,Th1rt3en has a lot of winners.

Per the usual, riffs are the focus here, as Mustaine is still enamored with the snarled portion of his voice. (And yes, Blistering was a fan of Mustaine’s actual “singing” circa 1994-1997) Opener “Sudden Death” kicks off with a towering Chris Broderick solo, recalling some of the spiraling leads from the Peace Sellsera. From there, the song heads into a staccato crunch that works well with a melodic chorus. “Public Enemy No. 1” is an instant charmer, bolstered by a riff that would fit nice and snug on Rust In Peace, and is also helped by Mustaine’s best vocal performance on the album.

The political angle of the band gets a workout (just like it did in ’92) on “We, the People” and “Guns, Drugs and Money,” two songs that have the loose and sideways metal feel of the 90’s. Not exactly sold on “Wrecker” (Mustaine occasionally hits the wall lyrically…this is the case here), but hard to not rock out to “Deadly Nightshade” (love the verse riff) and lap up the closing dramatics of “13.”

Th1rt3en topples 2009’s Endgame as Megadeth’s best post-comeback album. Unlike its predecessor, Th1rt3en is reigned in more by Mustaine’s songwriting acumen than savory riffs. But when the two parties are successfully combined, it’s a sonic goldmine, and a reminder that when inspired and/or pissed-off, Dave Mustaine cannot be stopped. That is, unless Lars Ulrich baits him into making another Risk. At least Mustaine isn’t doing an album with Lou Reed.