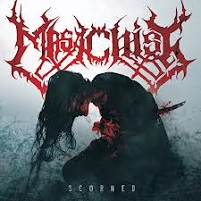 The unsung hero in the Dimmu Borgir 2010 lineup overhaul is drummer Daray, who was entrusted with filling the vacated throne left by Nick Barker and Hellhammer. Daray has done such a good job that no one has noticed, making Blistering draw the parallel to him…and an NFL offensive lineman. As us autumn Sunday fiends have come to learn, a good offensive lineman goes unnoticed, for his job is to neutralize the opposing team’s top pass rusher and avoid dreaded holding penalties. The best ones never have their name called or draw attention to themselves, much like Daray has in his stint in Dimmu. In essence, he’s the Joe Thomas of extreme metal drummers. (Had to throw in a Browns reference.)

Formed in 2005, Masachist is a Polish death metal vessel, equal parts Vader and Behemoth. Also of equal importance is vocalist Sauron (aka “Pig”), who previously did time in halcyon era Decapitated, lending his bowel-scraping rasp to minor genre classics such as Winds of Creation and the monstrously underrated Nihility. So in a way, Masachist is a Polish death metal supergroup, with a pedigree virtually unmatched in their home

Scorned is the band’s second offering, relying heavily on crisp, quasi-technical riffs and Daray’s multi-faceted drummer. There’s no major player here; the quintet is able to congeal into a death metal steamroller, most notably on lurching numbers such as “Inner Void,” “The Process of Elimination” and the grinding “Straight and Narrow Path.” The band is probably at their best during the intricate spew of “Higher Authority,” which rings like a more even-keeled Behemoth, complete with Sauron’s hearty bellow and Daray’s relentless blast attack.

Surprised this one has turned out to be such a sleeper, but Scorned has the wares and necessary elements to become a vital contribution to the steeped-in-tradition Polish death metal scene. As it has to come to be, Polish death metal bands

generally exude quality, and Masachist easily can lay claim to that as well.