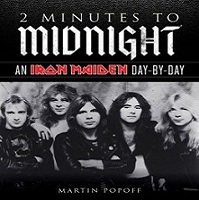 Mondo dearth of Maiden books out there; you’d think more would be in population…it’s not like the band doesn’t have a fascinating story to tell, you know? Not counting Mick Wall’s now-outdated 2003 Run to the Hills tome, there’s a lack of that “be-all, end-all” Maiden book, and while the book in question, Martin Popoff’s 2 Minutes to Midnight: An Iron Maiden Day-By-Day, doesn’t go full-throttle with storytelling and anecdotes, it offers up something different by telling the Maiden story in diary formatting, with each and every important event chronicled to the day.

Primarily known for the uncanny ability to be unbelievably descriptive with distinct flair (and sometimes disregard for general writing conventions), Popoff’s eschewing of the traditional biography format makes 2 Minutes to Midnight the type of tome ready and willing to be picked up…and left off with at any time. Detailed entries go through the band’s halcyon days, with Harris swapping out members, finding Dave Murray, enlisting Di’Anno – well aware of his limitations both on and off stage, and fighting off the urge to go punk when everyone around them did. Flex in some helpful quotes from Maiden manager Rod Smallwood, the band, as well as some hard-to-find early photos, and that period is thrust together quite nicely.

The meat of the book tends to the band’s hard-to-top glory years (’82 to ’88), with Bruce Bruce coming down the pike to skyrocket Maiden into arena status. With every key moment that took place, whether the release of a single, tour, album, etc., Popoff has it noted to the day, complete with full description and usually, some accompanying quote, most of which get interesting once the bottom fell out during the early 90’s and Blaze Bayley came in for mop-up duty.

Utterly recommended for those inclined to dig into the vast vaults of Maiden, 2 Minutes to Midnight: An Iron Maiden Day-By-Day is about as unique of a band-related book one will stumble upon. Popoff has insinuated to this writer he’s got something similar in the works for another “big” metal persona…that will be gobbled up quickly too.