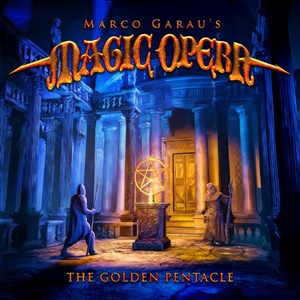 Assembling a lineup of players from other power, progressive and symphonic metal acts, Derdian keyboardist Marco Garau created his own Magic Opera solo project. The Golden Pentacle is a bold eleven-track offering, encompassing sixty-four minutes plus of symphonic power metal material – a conceptual storyline based on wizards, matching music and lyrics in grand splendor. The sextet includes players from Seven Thorns, ShadowStrike, Wings of Destiny, Oxidize as well as the Derdian rhythm section to flesh out the multi-faceted soundscape.

Broad strokes of sonic alignment include neoclassical strains against levels of keyboards, orchestration, and driving guitar work – Marco able to lift his skills to the Jens Johansson-like elevation during “Elixir of Life”, but also allowing guitarists Matt Krais and Gabriel Tuxen ample opportunity to weave arpeggios and fleet of finger axe breaks whenever appropriate. Circus-like shuffles appear during the verses for “Keepers of the Night”, providing a bit of a left-field turn while vocalist Anton Darusso dances deftly from mid-range to soaring upper register falsettos through the magnificent, powerful chorus. The songwriting contains the requisite uplifting hooks and majestic drama to keep listeners riveted track to track – unison keyboard/guitar harmonies setting up main riffs, be it mid-tempo and marching for “Fight for the Victory” or allowing Marco’s proficient piano tinkling to give chase to another epic twister with the almost eight-minute “The Sacred Legacy” packed with plenty of syncopated neoclassical instrumental aspects to dissect and treasure. And of course, what symphonic power metal record wouldn’t be complete without the emotional ballad that “The Other Side” achieves – any Stratovarius follower would be delighted to take in this effort again and again. Evenly balancing all the intricacies of the instrumentation is no easy feat, but Marco Garau’s Magic Opera achieves the best of acts like Stratovarius, Rhapsody (Of Fire), Yngwie Malmsteen, and others who push symphonic power metal through a neoclassical lens.

The Golden Pentacle doesn’t seem like a debut record – the performances, songwriting, execution, and packaging top notch as if these artists have been together for a decade. Close your eyes and take a trip with the wizards, you’ll be rewarded handsomely if this style is in your preferred aural wheelhouse.