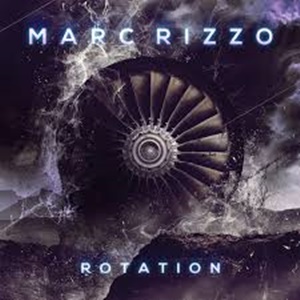 Best known around these parts for his long-term guitar role in Soulfly and Cavalera Conspiracy, Marc Rizzo has a rather prolific solo instrumental recording career as well. Releasing four albums from 2004-2010, he’s been issuing singles in the interim as his touring and recording activities with the other two acts take precedence worldwide. Now we arrive at Rotation, and the nine songs on tap run the gamut across his adept abilities at neoclassical shred, progressive metal, and a modest amount of flamenco/Latin percussion action to diversify the proceedings.

The feel for the record spans the man’s career, the diverse influences he has had that shape his style of play, and also veer into smart segmentation with plenty of hooks to latch onto as you are taking in the jaw-dropping lead breaks and harmonization that sprouts up. The low-tuned staccato crunch and groove propulsion set the foundation for the advanced arpeggio runs and progressive riffing at times during “Signum” and the follow-up “Spectral Intensities”, Marc knowing when to go full force at the shred aspect and then again, how to temper things with catchy refrains or licks that return and revolve. His playful side comes out on the closer “Thrash Boogie”, appropriately named due to his fast hitting finger action and hypnotic rhythm section interplay. Midway through “Ad Pila Et Spathas” features multiple acoustic/flamenco guitar passages against Latin percussion/drums, giving us another diverse side to not only his heritage but evoking a lot of early Santana appreciation. When Marc chooses to be heavier and slightly more progressive, you get a Nevermore-like arrangement such as “Hear Nor There”, and there’s even a bit of Chaos A.D. homage going on during the mid-section of the title track before returning to a spacious, Dream Theater-oriented stair step riff platform.

Add in the brilliant, skilled knowledge of Chris ‘Zeuss’ Harris behind the boards and Melody Myers cover art and you have a bountiful instrumental metal record that encompasses the man’s love for thrash, progressive metal, groove metal, and Latin flavor genres. Another effort that can gain favor with the musically inclined as well as general metal-minded individuals.