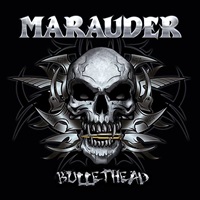 Makes sense that epic/power metal has always developed consistent appeal in Greece – considering their rich love of fantasy, history, and mythology. Athens quintet Marauder release Bullethead their sixth studio album in a 26-year career – proving that persistence is an objective in this band’s makeup right out of the gate. Guitarists Andreas Tsaosis and George Sofronas started this group in the early 1990’s, and their axe power along with the leather lungs of Nikos Antonoyiannakis carry the workload for almost an hour of songs – epitomizing a tried and true style of music that doesn’t waver much or offer many surprises.

Acoustic guitars and piano passages give way to the uplifting cultural mid-tempo riffs, swooning background mead hall vocals, and steady back beat that is the 8:02 “Son of Thunder”, an arrangement that stokes the fire for Grave Digger/Manowar maniacs. At other times Judas Priest/Running Wild comparisons come to mind in terms of the melodic runs and general power chord choices, as “Spread Your Wings” and “The Fall” represent two numbers where those large, marching strains reign supreme in Marauder’s world.

The problem with Bullethead lies in the lackluster rhythm section interplay – as the tempos and fills tend to be rather pedestrian and tell-tale, as well as some of the cheesy gang choruses (‘ROCK’ during “Tooth n Nail” for instance a la bad Helix). There are times where you just want Greg Vlachos to loosen up his grip and attack the drum kit with a little more ferocity – as Andreas and George deliver a lot of tremendous six string breaks with all the tapping and harmony tricks of the trade. Nikos’ gritty melodic resonance is beefy and appropriate to the style on display – a mix of John Bush and Eric Adams that keeps “Dark Legion” and the battle ready “Shadowman” aurally interesting.

So you have a see-saw going between traditional epic/power metal that should gain allegiance from the faithful, yet distance from the curious onlookers because Marauder isn’t really straying far from their heroes. Bullethead would slot well in 1983-86 based on the cover alone… but these days, you need more than a striking visual presentation to keep people’s interest musically.