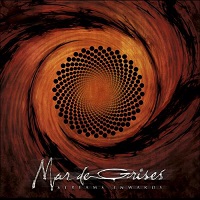 Streams Inwards reveals the same thing about Chile’s Mar de Grises that their previous album Draining the Waterheart did: the band isn’t quite there yet. One would be a fool to not be drawn to the band’s shimmering, dark, death/doom model, and during the handful of times the band does shine, it’s a near-revelation. Yet, those moments can tossed aside for lesser, more tepid ones, and in turn, keeps the enthusiasm levels at lukewarm.

There’s a prevalent Wildhoney-era Tiamat vibe on Streams Inwards, of which is an instant plus. The guitars are sparse, yet echoed, and singer Juan Escobar has the necessary graven vocal tone to complement his surroundings. Opener “Starmaker” winds its way through a path of keyboard-drenched and melody-infused moments, as does “Shining Human Skin.” Album highlight “The Bell and the Solar Gust” is clearly the best song the band have put the tape, evoking the melancholic and urgent thrust of the style’s forerunners. Once past that, though, it’s a lot of wallowing in nothing.

When the band attaches itself to more straightforward, non-atmospheric songs like “Knotted Delirium” and “A Sea of Dead Comets,” that’s usually the tipping point. There’s little to latch onto, as the keyboards become flaccid and the memorable moments that coalesce on “The Bell and the Solar Gust” fade into the back.

Mar de Grises is staring at greatness across the street. Streams Inwards, as front-loaded as it is depends solely on the strength of its first three or four songs, which is not a good sign if you’re trying to man-up to the classic Tiamat’s, Opeths, and Katatonias of the world.