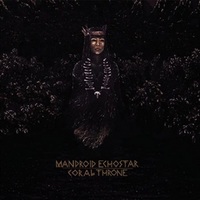 Mandroid Echostar’s second EP release, Citadels, really elevated their status, at least in the minds of the followers of the more modern progressive sound. Releasing an instrumental version of it a year later showed some definite staying power and allowed the band some writing time for their full-length debut, Coral Throne (which they began writing in 2014). Upon hearing it, it’s easy to see the band continuing to make waves in the community off the success of this album.

Again sporting a concept in tow, Coral Throne is a varied and dynamic album sporting plenty of progressive tendencies. Those into bands like Protest the Hero or Coheed and Cambria (or even Periphery) will find Mandroid Echostar right up their alley. There are some heavier numbers, such as “Iron Hands” and “Paladin” that have plenty of weight behind them, with intricate melodies and soaring vocal hooks cut in to add some balance. This balance of technically driven prog with great hooks (both instrumentally and vocally) is easily the band’s strong suit and leads to tracks that feel completely addictive. The instrumental version of Citadels showed just how interesting their songwriting is, but the emotive vocals of Michael Ciccia are truly the icing on the cake. Other songs have a more rock influence, with “Violet Skies” and “Midnight Sun” showing a more poppy atmosphere (which thankfully never becomes distasteful), showing that metal is only one of many colors that the band paints with, and is sure to lead to some crossover potential as their name gets out there.

Looking to be one of 2016’s early buzz bands, Mandroid Echostar have a lot to offer. Coral Throne is an adventurous album that superbly balances technical progression with melody, while the band branches out into more diverse waters.