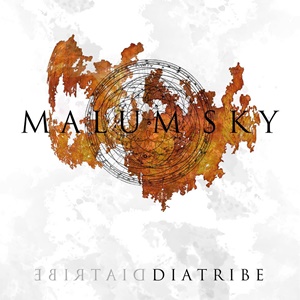 Progressive metal in today’s landscape certainly evolves based on the advances in technology, musicianship, and structure. While decades ago Dream Theater and Symphony X may have been the benchmarks, it’s just as easy today to hear Haken or Periphery thrown into the conversation. Therein lies the wide array of influences that take hold for Malum Sky on their second EP Diatribe. This UK band since 2014 have been delivering a blend of jarring rhythms, commanding vocal melodies, and a style that can incorporate everything from staccato/djent-like passages to atmospheric clean/hypnotic sections all floating within this progressive metal context.

These five tracks contain a swinging rhythm underpinning that forces brain and body to sway in unison, all the while allowing supplementary bass, drum, and guitar accents to penetrate on that second level of consciousness. You’ll have plenty to process in a song like “Eye Above”, the subtle shifts between alluring clean echoing guitar parts and the darker, low-tone driven crunch hopping mesmerizing for singer Ben Honebone to float above. The mathematical ping-pong rhythm bounce that opens the concluding title track again gives a forcefulness that is hard to resist, the arrangement transforming as open chords and circular sequences weave back and forth into a tantalizing, almost seven-minute statement that contains aspects of Meshuggah, Tool, Dream Theater, and 90’s alternative punch. Ben’s willingness at times to chart his own path vocally aids the Malum Sky cause – be it a semi-spoken speech verse, or the multi-octave smoothness and gruff background spots on display during the mid-tempo, heavy opener “Year of the Rat”, it elevates the hook factor necessary to capture more than the virtuoso / school crowd.

Add in a mini-concept lyrically surrounding the forms of communication we have at our disposal today and how this information is interpreted / acted upon by individuals as well as society as a whole, and you’ll understand we aren’t dealing with a dinosaur outlook at the genre. Malum Sky embrace modern technology without abusing it, as well as a proper respect and channeling of the past veterans that keeps Diatribe fresh and slightly innovative.