Malthusian – Below the Hengiform (Invictus Productions) 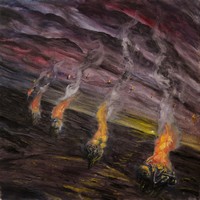 After a rather well-received demo back in 2013 (appropriately titled MXIII), Irish extreme metallers Malthusian are back with a three song EP entitled Below the Hengiform. With a sound that frequently defies conventional labeling and the drumming efforts of JK (Altar of Plagues, Abaddon Incarnate), it’s easy to see why many are quick to give the band a thumbs up.

The trick to Malthusian’s sound is that they don’t linger in one segment for too long. Within a standard track (both “The Gasless Billows” and “Slouching Equinox” pass the nine minute mark), the band twists and turns their way through elements of cavernous death metal, doom, black, and even a trace of sludge. Regardless of the approach, the end result is usually the same: terrifying. Some nods can be made to bands such as Portal or Impetuous Ritual, but there’s actually more diversity going on here. The final track, “Forms Become Vapor,” actually becomes somewhat more melodic towards the end without diluting the band’s otherwise murky approach and signals that they are even more capable of tossing the conventional dynamics out the window. Hopefully the next release will see more of these interesting shifts.

All in all, a filthy and dreary trip though a not quite standard take on extreme metal. The range of the band is impressive, and with the potential they display to carve things outside of the box, a slight push further in that direction will mean that they are truly onto something impressive. But for now, Below the Hengiform is a fine effort of knowing how to avoid some usual death metal trappings.