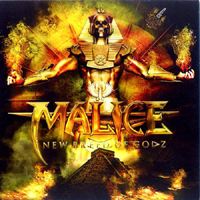 Originally hailing form Portland, Oregon, Malice began life in 1985 playing balls-out speed metal. In a blazing vengeance of rock n’ roll fury, this traditional metal act carved out a legacy on In the Beginning, and License To Kill before being dropped by Atlantic records like a hot potato. A final EP (Crazy in the Night) was recorded before Malice finally disappeared from the scene.

Flash forward to 2006, when guitarist Jay Reynolds got the itch to reform the band with original members Mick Zane and Mark Behn. All they needed to complete the new line-up was a drummer and vocalist, and they would be off to the races yet again. The group enlisted the aid of the great American screamer James Rivera (of Helstar fame) to lead the charge and I am going on record right now to say how brilliant a move this is.

James Rivera is the perfect vocalist for the newly reformed line-up. Not only is he a powerful singer, but he more than aptly fills the shoes of the band’s original frontman James Neal. Now if you thought Neal sounded uncannily like Rob Halford, then wait till you hear the screams of Rivera. I have always been a huge fan of Helstar, so getting a singer of this magnitude to front Malice is a major coo. His presence is surely felt on the new full length; New Breeds of Godz lifting the material up into the higher echelon of traditional American metal.

From the opening moments of the title track, the dueling guitars of Reynolds and Zane roar into life and is picked up by Rivera’s patented screams. The riffing is outstanding and this trend continues into “Hellrider,” and “Against the Empire.” At times Reynolds’ guitar playing reminds me of Dave Mustaine (circa Peace Sells era) and this isn’t an exaggeration given that Reynolds had a brief stint in Megadeth in the late 80’s. Dave definitely had an eye for talented guitarists, and Jay Reynolds certainly fits the bill.

My only question is what took so long for Reynolds to reform this amazing band. The guy can flat-out play his guitar, infusing precision and speed with the best of them. In fact all 12 tracks on this release are prime numbers and should help to bolster the band when playing live this summer. As far as reviews go, I can’t think of a single negative thing to say, given how solid this album is constructed. Personally, I am blitzed after several spins, so check this out and raise your fist in salute at the return of the mighty Malice.