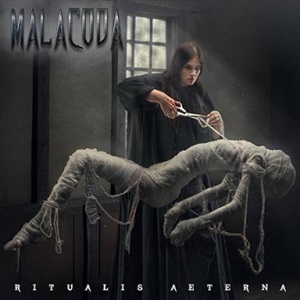 Containing veteran players from Canada and the United States (who have had seasoning in recording or touring capacities with Annihilator and Pyramaze among others), Malacoda seek to develop an intoxicating blend of dark, melodic metal on this six track EP Ritualis Aeterna. One look at the band’s face paint points to a differentiation from the norm, crossing the lines of say King Diamond and black metal – drawing attention to horror-fueled imagery that matches the moody musical landscape present.

Through the wide use of keyboard layers and orchestration from Jonah Weingarten, Malacoda create this cinematic, picturesque sonic landscape that channels deep-seeded emotions that may appear to be negative on the surface and turn them around into lush, open horizons that are powerful and remarkably uplifting. The circular guitars from Brad Casarin and merry-go-round tempos for “Penny Dreadful” open up haunting vocal parts for Lucas Di Mascio, keeping things very much theatrical but in a conventional gothic mid-range delivery, the blast beats during one of the instrumental sections courtesy of Mike Harshaw adding an extreme touch to the proceedings. Certain influences may not be easy to pinpoint (although Kamelot and Type O Negative rate high on Malacoda’s radar), especially given the fact that a track like “Pandemonium” has addictive, hook-laden guitars and massive tubular-oriented bells plus a synth presence that draws me back to the controversial One Second record of late 1990’s Paradise Lost.

The ballad “Linger Here” not only gives the listener a moment to pause, but at 2:28 keeps the emphasis on Lucas’ restrained melodies matching in splendor against Jonah’s tender piano play. The grey and black to light contrasts for the mummified cover set the scene for what to expect on Ritualis Aeterna – 25 minutes of gothic metal that is morose while melodic, as well as cinematic in terms of presentation and execution. Competent material that should find a wide swath of appeal due to its multi-level genre approach.