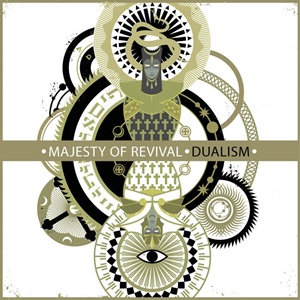 Purposely suspending band activities for one year to put forth the best studio recordings on this third full-length record Dualism, Ukraine’s Majesty of Revival are a quartet led by the guitar/vocal work of Dimitriy Pavolvskiy. Founder of the group seven years ago, the band certainly has been through a fair share of lineup changes (three bassists, three vocalists, and two keyboardists), probably due to the diverse progressive/neoclassical oriented metal style on hand. Delivering 14 tracks at a sprawling 71 minutes sends off alarms, as once again this may be creatively satisfying to the musician, but could be quite exhaustive if not dynamically different enough for the listeners.

Given this scribe’s first foray into Majesty of Revival, there’s no denying right from the get go an obvious proclivity to virtuoso abilities on all fronts – neo-classical and progressive leanings that makes “Deadlock” an entertaining opener in Symphony X-like grandeur. Consciously deciding to take a no holds barred approach in terms of the songwriting allows for shades of gothic metal a la Paradise Lost/ Sentenced to appear on “Alive” while modern hard rock inflections come to the forefront on “Serenity” – but therein lies a possible long-term weakness as band identification can prove to be problematic. Where the band excels is the symphonic keyboard layers and equally engaging guitar riffing that backed by an energetic, controlled tempo minded rhythm section puts “Awaken” and the title track at memorable heights for power/progressive metal.

Dimitriy as a vocalist sits in middle of the road land as far as delivery and range – not spectacular, and yet not diminishing the impact of the material on hand. He’s not going to ever be considered in a caliber of Russell Allen, Tony Kakko, or even James Labrie – the phrasing and melancholic nature to his voice more in line with say Ville Laihiala of the much missed Sentenced, as the aforementioned commercially viable “Alive” and stripped down closer “Same Blood” attest. Hate to come back to that ‘too long of a record’ argument for Dualism, but a little 20 % trim could have made for a stronger, 50-minute platter in the end. Majesty of Revival wrap exquisite musicianship in tight spots while always honing in on proper hooks and melody parts – as a result assuring itself varied appeal from the neo-classical, power, and progressive metal camps.