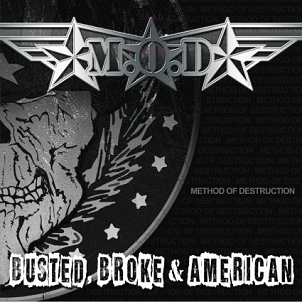 M.O.D. back on Megaforce is like a homecoming of sorts. The Billy Milano-led crossover outfit initially cut its teeth on the label in the 80s, in particular, their semi-breakout U.S.A. for M.O.D. and Surfin’ M.O.D. efforts, a pair that helped Milano create separation from his work in S.O.D., who were also on Megaforce. Even with M.O.D. never quite reaching S.O.D.’s exalted level, Milano remains one of the most visible mouthpieces in metal, his blunt takes on all things making him a permanent lightning rod. With the United States in the throes of all sorts of political peril, it seems like the right time for Milano (a self-proclaimed hardcore Republican) and company to re-emerge with their first album in ten years, Busted, Broke & American.

Perhaps less metal than some of their previous efforts (who could forget the band’s polarizing 2003 The Rebel You Love to Hate?), Busted, Broke & American is quick to draw crossover, almost anthemic punk blood. Whether it’s the spikey “The Final Declaration,” vitriolic “You’re a Fucking Dick” or the mosh-ready “Hooligan,” M.O.D. remains rather adept at those quick, in-and-out jams, long on substance and Milano commentary. And indeed Milano is still quite animated for a hardcore shouter over 50, as his cagey roar mows ‘em down on “Go Go Revolution.”