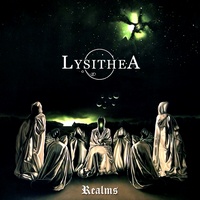 A pleasant little surprise that was tucked under my virtual doorstep was Lysithea’s third release, Realms. Lysithea has been plugging away down in New Zealand since 2008, also firing off two EPs since that time as well. Those who frequent doomy styles on the deathier side of the tracks would do well to keep your ears peeled for this one.

Lysithea manage to cater to both the doom and melodic death crowds in equal favor with Realms. On the one hand, you’ll hear all the hallmarks of solid doom/death: elaborate and lengthy songs, somber atmospheres with a harsh/soft dynamic blended in, and punishing roars. The type of thing that would appease many fans of Daylight Dies, Atten Ash, or Woccon. Yet they strike a distinct balance with melodic death metal’s twin guitar harmonies. Those who still yearn for the type that The Jester Race-era In Flames could pull off, or even a more doom-rooted band like Insomnium at their more upbeat moments. The two elements are seemingly a perfect fit for each other, which lead-off track “Hyperborea” is quick to point out. The band even gets into the blasting mode on a few occasions to offer a change in pace, as well as not shying away from some soft keys or acoustic moments when the mood is right. “The Lighthouse” even features some clean female vocals to further diversify the album. Obviously, Lysithea isn’t afraid to offer a diverse palette.

In what should be an easy sell to both melodic death metal and doom fans, Realms aims to satisfy. Long, doomy tracks that are nicely spruced up by highly engaging melodies and atmospheric interludes may not be too far outside the boundaries, but it’s a rather complimentary mix. Here’s to hoping they get a bit more exposure with Realms.

Lysithea – Shadows in the Void