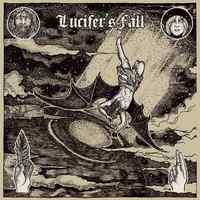 Not to be confused with “Satan’s Fall,” the legendary Mercyful Fate song, Australia’s Lucifer’s Fall are pretty much on the nose when it comes to tried-and-tried-blue doom. As in, this is about as bare-bone as you can get, with an analog production, absence of studio trickery, and raw, if not ugly somewhat sung vocals. It’s primitive doom ala St. Vitus, early Sabbath (who else), and Gates of Slumber, although Lucifer’s Fall may not be as heavy as the latter. Point being, the band’s self-titled effort is open season for doom purists, who wouldn’t have it any other way…

The band’s somewhat cartoonish stage names aside (cue names as “Deceiver,” and “Unknown, Unnamed”), the overall tone of this seven-cut outing reflects many of the simplicities found with early doom. The guitar riffs are hardly remarkable; more like immovable boulders covered in smoke and soot from whatever substance was smoked during their creation, while as previously mentioned, the vocals of Deceiver (who receives credit for “doomed bellows and banshee howls”) oscillate between grizzly on opener “The Suffering Wizard” and “A Sinner’s Fate,” to surprisingly high on the band’s namesake song. As in, King Diamond high, which in a way, ties it all together nicely considering Lucifer’s Fall’s name and all.

Purist doom such as this has often been able to survive based on its adherence to how things used to be, which for some, is all that is needed, especially when it comes to metal like this. Therefore, simply by operating without the safety net of studio trickery, enhancements, extra bells and whistles, blah, blah, Lucifer’s Fall should earn a spot in the tattered hearts of the venerable old guard, who generally go out of their way to expound the virtues of Ozzy-era Sabbath without realizing a heck of a lot of good stuff came after. That’s how these things work.