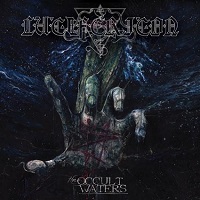 The latest entry into the Dutch metal scene, Lucifericon features members (and ex-members) from Destroyer 666, Pentacle, Excision, and Malicious Dream.  The Occult Waters was actually a self-financed demo released in 2012, but Blood Harvest was gracious enough to release it on vinyl for a wider audience this year.

It’s safe to say that Lucifericon have been listening to plenty of Morbid Angel and Dissection.  The Occult Waters will give you four tracks of solid occult black/death metal (I’m not counting the one-minute time suck that is the humming and buzzing intro of “Infinituum” as it is the very definition of a pointless lead-in), it’s just you’ve probably heard it before.  “The Temple of Lucifericon” starts things off with a very Morbid Angel-esque riff that showcases the slightly raw and dirty feel the production provides.  The mostly mid-paced track also showboats a fairly classy solo, which also show up on later tracks.

“Moon Over Fading Statues” kicks things into full-on Dissection worship, leading off with some acoustic guitar and slowly building up atmosphere for the first two and a half minutes before ratcheting up the blast beats and their hellish blackened rasps start to chime in.  It leads directly into “Azazel’s Torch” and the two almost feel like one long, ten and a half-minute track.  The band drops all pretenses and fires relentlessly on all cylinders for the final track, “Deathtongue” and it feels like the strongest track here, despite it’s measly two and a half minute presence (yes, it’s as long as the build-up to “Moon Over Fading Statues”).

There’s nothing really wrong with The Occult Waters, it just sounds exactly like their influences.  Hopefully the band will be able to establish more of an individual identity before their inevitable full-length offering arrives.