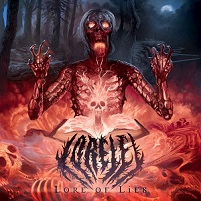 Fans of symphonic deathcore a la Ovid’s Withering have been undoubtedly counting the minutes waiting for Lorelei’s debut album, Lore of Lies, to be released. Taking their formula of chugging riffs, occasional bursts of speed with blasting and technical leads, and grandiose symphonic elements with a distinct horror-movie vibe, Lorelei seems eager to carve out their own little niche within the genre.

Lorelei’s biggest strength is their utilization and overall incorporation of the symphonic elements. The opening instrumental “Preface to Insanity” gives a sheen of elegance just in time for “Godfather Death” to deliver some crushing breakdowns and symphonic urgency. However, the best example of this is the culminating 12-minute title track that provides a genuinely spooky vibe, while retaining some beauty as well as some standout lead work. The band abruptly tempos with no difficulty and the length gives it plenty of breathing space while keeping the listener engaged.

The one weak spot here are the riffs. By no means is it a slouch effort, but the symphonic elements are so dominating in the mix that outside of the technically proficient leadwork, not many riffs standout (other than that of the strangely titled “The Mortal Immortal”). One is more apt to remember each song due to its symphonic melody, which is fine, but this is metal that we are talking about here. There is also a reliance on the more generic deathcore breakdown and riff structure that does little to step outside of the box. While massively heavy for the first few listens, the brutality begins to wear down upon repeated play.

Lore of Lies has plenty of potential should the band decide to rise above their deathcore peers. Their usage of classical symphonies is rather impressive, they just need to get the riffs to back it up. Should that happen, Lorelei will have a real winner on their hands.