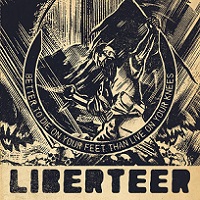 Politics have always been a favorite topic amongst the grindcore crowd, thus casting them in better-informed (and much smellier) light than the rest of us metal yokels. That could be the case, for the longstanding socio-political salvos from Napalm Death, Brutal Truth, and the like have managed to hold up over the years. Granted, no one likes being preached at, especially in a presidential election year, but by placing it in the context of frenzied grindcore is usually a good work-around, as Liberteer, the project of Cretin/Citizen guitarist Matthew Widener is attempting to do.

The band’s debut is Better To Die On Your Feet Than Live On Your Knees(awesome title), and takes the core elements of grind and adds symphonic twists to them. Most of the orchestration adds a nice touch to Widener’s compositions, as some of the note sequences he uses have a patriotic feel to them, like on “That Which Is Not Given, But Taken.” However, some of the orchestral moments on “Usurious Epitaph” and “Sweet For Blood” sound a tad silly, especially the latter, which sounds like it was pulled from the Rocky IVsoundtrack.

Beyond that, the standard grind songs

are duly extreme, embodying grind’s speed-or-die approach. Widener manages to crank out some caustic riffs on “Build No System” and “Class War Never Meant More Than It Does Now,” both of which nip at heels of Napalm Death’s early 00’s era.

One has to find it weird that for such a politically-motivated album that for the most part, Widener is indecipherable. That’s always been the odd twist with grindcore and in this era where lyric sheets and CD booklets are all but nonexistent, the listener will just have to rely on song

titles and the occasional moment where Widener can be understood to grasp the message. Either way, Better To Die On Your Feet Than Live On Your Knees is certainly an album for the times…just don’t expect it to be as consumable as a political pamphlet.