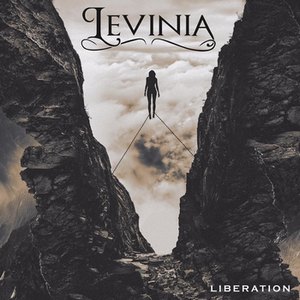 Having already hit these pages a few times this year, rising act Levinia are back with their first true EP, following up on the Alluring Fear demo released at this start of this year. Where earlier explorations were more of the typical symphonic style with some impressive heaviness, Liberation sees the band expanding further into even heavier and more progressive/modern territory – something that gives them a more unique and more satisfying feel.

With a modern crunch backing them up, the playful riffing and melodies of Levinia have an added boost in the aggression department. There’s a floaty/air-y feel when the band really lays thick into the groove department, something that makes tracks like “Push and Pull” immediately addictive. The palpable sense of groove, ability to utilize some short drum blasts, and explosive aggression is a sharp contrast to the symphonic elements in the backdrop, and Court Henson’s more ethereal vocals. But it works marvelously, giving the band a fresh take on what has increasingly become a formulaic approach within the genre. There are moments when some more bombast takes over (such as the title track), but there are more gothic vibes as well (“The Fall”), and even some near melodic death metal levels of riffing (“Promise and Pride”), all of which comes together to create something that will immediately draw you in with its charm, but has a level of depth to the music that will bring you back for plenty of future helpings.

The usual argument against many bands of this style is that they rely too much on just the vocals. While Levinia has an exceptional vocalist in Henson (who throws around plenty of creativity in her performance), it’s also very evident that the entire band is just as important. There’s just as many impressive moments that come about due to groovy, headbanging riffs, blistering drums, or an atmospheric synth. Overall, Liberation is a thoroughly impressive EP that should find appeal with both the modern metal and symphonic crowds, especially those craving a little extra heaviness in their material. Levinia are onto something great here, best to catch them here at the ground level and watch them explode to the next level in the near future.