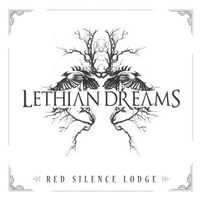 Ever have one of those moments when you hear part of one song and instantly need to purchase the entire album because it’s so intriguing? Yet another shining victory from scouring Bandcamp on a regular basis, Red Silence Lodge is French band Lethian Dream’s third album of atmospheric doom. If you are a fan of Anathema or Alcest, this should jump towards the top of your wishlist.

Settling into that “is it metal or is it not metal” category, Lethian Dreams does emphasize doom, but not in the ultra heavy fashion. The present doom is in a constant flirtation with post-rock, dreary atmospherics, and even some shoegaze. Sonically occupying a space not unfamiliar to fans of the previously mentioned Anathema, with sullen melodies that harken to that band’s earlier days (before they took the plunge into prog rock), and taking with them the biting emotional punch that Novembers Doom brings out on their quieter tunes. Needless to say, this isn’t the most uplifting album in the world, but does wear its emotions on its sleeve. This is enhanced by the band’s usage of clean and acoustic guitars and subtle keys, as well as Carline Van Roos’ low-key, ethereal voice. Her vocals draw you in and make it seem like it’s okay to drift through this otherwise sorrowful and depressive landscape. The lack of a cliché growled male voice through these tracks is a welcome absence (which apparently was present on their debut album).

Certainly not an album that will have across the board appeal (especially those that need their metal to be METAL), but one that is should have major appeal to the doom crowd. Those looking to sit back and absorb all the sorrow of the world would do well to just push play on Red Silence Lodge and bathe in the helplessness of it all. Someone get these folks an album deal!