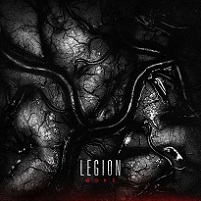 If you have to point out the fact that you’re “weird,” you probably aren’t. Similarly, if you feel the need to state how “smart” and “intelligent” you are, chances are, that isn’t the case either. Columbus, OH’s Legion thought it was a good idea to explain to us, the prickly metal press, that the route they took was “Against the grain. On the path of resistance, decidedly choosing hard work and originality.” Well, a few listens to their Woke debut and it became more apparent the band needs a sonic lobotomy, and someone to give them a dose of reality.

Plucked from virtually the same sonic (or sound) garden that the minions of deathcore reside (see: Whitechapel, Oceano, Carnifex, etc.), Legion’s sound isn’t remotely original in the slightest. They’ve aped Meshuggah’s guitar tone from Catch Thirty-Three and turned into it a chug-a-lug fest with beatdowns, stupid riffs, and indecipherable vocal patterns from Michael Guilford, who couldn’t be more nondescript. The occasional groove unearthed on “And Then, the Devil Said” and thrash bit heard on “He Became Death” are simply filtered through the deathcore grinder, churning out bland and utterly regressive music that is of virtually no quality.

Not that we’re riled up by the boisterous claims in the band’s bio (hey, someone has to prop these guys up), but music as banal and substance-less as Legion’s should be called out for the utter garbage that it is. There are no two ways about it.