Legendry – The Wizard and the Tower Keep (High Roller Records) 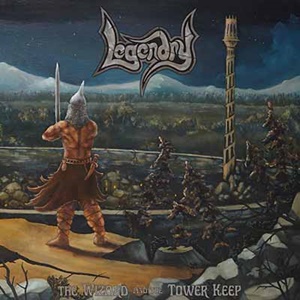 Pittsburgh, PA is home to mighty sports franchises such as the Steelers, Pirates, and Penguins – beyond a decent local metal scene. Legendry are another band to investigate – epic metal their forte since 2015 and releasing two previous full-lengths before issuing their third record The Wizard and the Tower Keep. A conceptual effort based on mastermind Vidarr’s novelette he wrote and published in the Fierce Tales: Savage Lands anthology, it’s a warrior adventure filled with mystique in a strange world, perfect content to match the musical proceedings.

The band’s tone and influences come from the classic realms when acts like Rush, Zebra, and the Scorpions circa Uli Jon Roth-period were cutting their teeth – along with hints of the epic masters like Cirith Ungol and Manilla Road to flesh out the Legendry sound. But it’s not a carbon copy, cut and paste favorite riffs and hooks affair – these musicians siphon their favorite aspects and put them in a context that is quite their own. Probably due to the unique vocals of the already mentioned Vidarr (responsible for guitars, mellotron, mandolin – and swords!), as his calming allure rises to the occasion if called for, but gives off that rich mid-range resonance to carry hypnotic lines during the seven-minute plus title track like a looming sunrise emanating in the distant sky. Longer instrumental passages allow the guitars, bass, and drums to each gain spotlights – emotive angles that enhance the 70’s/80’s-like magical atmosphere that takes place. The trio often lock onto a key circular series of notes, branch off with bursts of speed or doom elements, and then return to a traditional stance – creating a collective that feeds the audience and fuels the band because of inherent excitement. Check out “The Lost Road” and “Behind the Summoner’s Seal” for both aspects of longer/shorter dynamics, the latter using subtle guitar pedal effect enhancement while galvanizing the tempo to match to feverish verse pacing.

You can expect a cover painting that would look very impressive in a large banner or poster size format, while the production values subscribe to a throwback period, where you didn’t feel everything hitting a digital grid clipping everything into an even, polished final product. The organ keyboard underpinning against some killer wah-wah guitar action for the almost eleven-minute closer “Earthwarrior” reflects the incredible instinctual interplay Legendry possess, a strength that along with the folk-like start for “The Bard’s Tale” proves their dynamic abilities on record. The Wizard and the Tower Keep in the end is ideal for those who clamor for epic metal from newer artists.