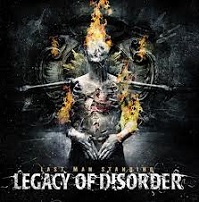 One has to wonder how many wife-beaters New Zealand’s Legacy of Disorder has in their collection. Being that the men’s “under-garment” was the thread of choice for pretty much every 90’s metal band, it only makes sense that LOD (not to be confused with VOD) would throw one of those suckers on and show off their tats. As such, the band is a 90’s metal amalgam that for better or worse, that dips into the (drowning) pool of Machine Head, Pantera, Biohazard to minimal effect on their sophomore Last Man Standing effort.

Produced by Sterling Winfield (Pantera, Hellyeah) and featuring a guest spot from King Diamond drummer Matt Thompson, Last Man Standing has the necessary amount of low-end and pop to give the band’s basic and relatively harmless riffs a launch point. Finding a groove is never a problem, and the band does just that on the respectable “Punish All” and “Treading the Tainted Path,” both of which see singer James Robinson do his best Robb Flynn-on-Anselmo vocal impersonation.

The overt simplicity of Last Man Standing draws an instant parallel to Fight’sWar with Words for some peculiar reason. Maybe it’s because of chunk-on-chunk riff approach, or the rapped-out “Break,” which is a total laugher of a track…LOD comes across as a less frothy Fight, only without some bald dude who can still hit the rafters with his falsettos. And when the pre-requisite war-mongering track “March to Death” hits, it’s as if Legacy of Disorder followed the pre-00’s playbook page for page. The only thing missing is a frosted goatee and some flannel.