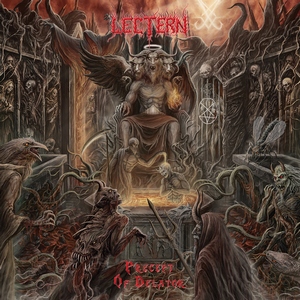 Old school death metal never does seem to die. Be it Swedish, Floridian, or New York-influenced, the death metal of the past still holds much power for bands of today’s status quo. The Italian act Lectern is one that has burst onto the scene, with Precept of Delator being the band’s second full-length in two years (following two smaller releases previously).

Lectern’s mode of attack is decidedly Floridian. Early ‘90s death metal in its most pure form, with even the logo styling and artwork further emphasizing said feelings. Lots of Deicide, Sinister, and Morbid Angel-esque riffing to be had, with an added weight on grooves. For the most part, this is straight-forward stuff – if you can imagine any of the band’s in question, you have a pretty good idea of what Lectern is going to sound like (for better or worse). However, that doesn’t diminish the Lectern’s sound since they have a strong grasp on what works within that style. From the heavy, churning grooves of the title track to the more raging “Fluent Bilocation,” there’s a sense of nostalgia and fun that the riffs provide, even if it is structured in a familiar way. Even the vocals play into this, having that demonic presence that the style (and cover art) necessitate.

While Lectern play a style that you’d heard throughout the years, they can identify the strongest points in the sound and take them for a whirl. If brutal, Floridian death metal is something that you crave, chances are you’ll get a rush from Precept of Delator. That being said, if that’s out of your wheelhouse, there’s nothing you’ll be missing either. 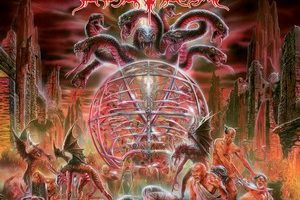