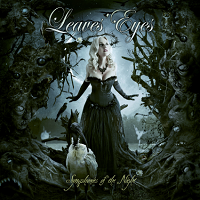 Lovely Liv Kristine and long, long-haired Alexander Krull make for a fine pair, the equivalent of Euro metal’s “Beauty and the Beast,” dare we get all poetic and ripe for comparison. You’d think such a combo would wane into a novelty, but it hasn’t for Leaves’ Eyes; there’s still some palpable, less Goth, more symphonic (cue the title) tunes being lumbered about, with the two pulling at opposite ends. Kristine generally wins out, as she’s the focal point and always will be, yet the slight death and power metal injection Symphonies of the Night receives makes this a rather enjoyable affair.

Now a serious shot past their Goth metal beginnings (see their 2004 debut Lovelorn), Leaves’ Eyes have come to embrace the sort of multi-tiered ability to meld lush operatic metal with gruff bursts of death metal and sea-faring power metal. This could explain why Symphonies takes on a more full-bodied approach, as in, there’s a lot of handle here, from the swooning “Fading Earth,” pouty title track, as well as the orchestra-with-Liv “Saint Cecelia.” But then you have the thrashed-up (?!?) “Hymn to the Land Sands” where Kristine hits a new register (and Krull comes in for some barks), and the bruising/tender see-saw of “Ophelia,” and it’s easy to identify with where Leaves’ Eyes is going.

Big-time stuff Symphonies of the Night is, specifically if drama-filled metal is your game, and the sensuous vocals of Kristine get you moving…or excited (yikes!). Never mind that; this could be the band’s finest hour, and album that seemed predictable at its onset, but shifts from the expected, thus opening new doors for a band who has hung around for nearly a decade without a real stumble.