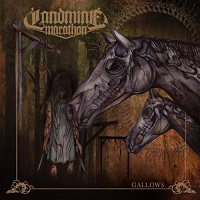 Hard to separate Gallows from 2009’s Sovereign Descent, as Landmine Marathon’s crusty, early-90’s grind doesn’t have a great deal of room in which to maneuver, but there’s some rather head-bashing moments here. Being that’s really the only purpose the band serves (singer

Grace Perry has long been the only selling point, though), Gallows wisely stays to true the band’s grind modus operandi rather willingly.

With a stronger death metal influence in tow (read: they’ve expanded upon Napalm Death’s short-lived Harmony Corruption era), Landmine Marathon employ a barrage of meaty riffs that are full and frothy. Granted, a handful of these riffs ditties are things any death metal or grind veteran (or snob) has heard before, yet LM finds a way to keep the grind kids happy during the fleet-of-foot portions of “Liver and Lungs” and chunky “Dead Horses.”

Perry, in spite of her constant foaming of the mouth, is rendered near-faceless toward the album’s back-end, the result of too much yapping and not enough personality. Such things could be expected when playing music with such little variety – a lot of what Landmine Marathon is attempting to do has been beaten into the ground well before this band was an idea in anyone’s head. Gallows is a slight improvement over Sovereign Descent, although in the grand scheme of things, it’s not saying a lot. 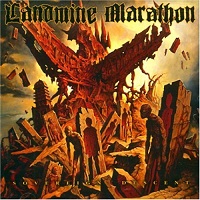