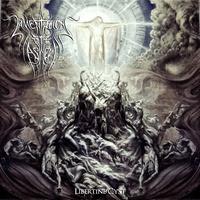 Because there are so many of them, the law of averages dictates that at least one of those singular dude black metal projects will squeak through and have an impact. Far too often, this sub-sub-genre of BM tends to plagiarize itself to the point of no return, further accentuating the unwritten rules that plague the style. It’s almost a total cliché nowadays for a reclusive gentleman (or female in Mykur’s case) to pillage the old playbook of Norwegian BM for their benefit. But alas, there’s always someone out there with a different approach, like Albuquerque’s Lamentations of the Ashen.

The project of Bon Vincent Fry, the band’s sound on Libertine Cyst (their second overall) is of course, firmly rooted in many of the stylistic traits that define conventional BM. The elongated song structures, stoic/demonic croak, and raw production job easily segment Lamentations of the Ashen. But, Fry’s compositions are easily some of the most mature and realized to hit the one-man realm in quite some time. His use of space and tempo, as so well-positioned on “II” and “Hiraeth (Topor of the Persiflage)” makes extended song lengths sound more like voracious jaunts in and around the realm of atmospheric black metal. Alien melodies, combined with the timely hum of keyboards give the band’s songs that always-needed existential dimension, something that as noted, really makes a song like Hiraeth (Topor of the Persiflage)” a winner.

Libertine Cyst is so enthralling because of its variance and unique set of atmospheric tools, none of which cling onto one specific black metal norm. Wherever Fry gets these ideas from (maybe there’s something in the water in Albuquerque) is irrelevant, for Lamentations of the Ashen have emerged as one of the real bastions of progress on the USBM front. Recommended. Totally.