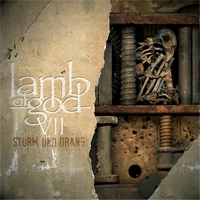 Lamb of God has always been a ‘solid and consistent’ type of band since the early years. Albums like New American Gospel, As the Palaces Burn, and Ashes of the Wake seemingly set the bar at such a point that the best they could hope for was to get the “it’s good, but it’s no As the Palaces Burn” type comments from fans. It’s taken the band over 10 years since Ashes of the Wake, but they’ve finally come up with a release that stands head and shoulders with their best.

While Sacrament, Wraith, and Resolution all seemed to be mixed bag with a few killer cuts, Sturm und Drang doesn’t contain a miss. It also sees the band moving outside of their usual bag of tricks on some tracks (don’t worry, “512” and “Footprints” are here for you sticklers for formula, with the latter embracing the ‘repeated, catchy obscenity phrasing’ that worked way-back on “Laid to Rest”). “Embers” is happy to roll along as a standard-issue LoG track, but takes a turn towards the end with the inclusion of the Deftones’ Chino Moreno crooning it out and bringing the track some added atmosphere. The already released “Overlord” also boasts some surprisingly well-working clean vocals by Randy Blythe, working as the first LoG ballad of sorts without the band losing its integrity. The closer, “Torches” feels a bit more ‘epic’ than normal, focusing on some lumberingly heavy riffs sure to work out the neck muscles.

Lamb of God’s bite is officially back in full check in many of the songs. “Anthropoid” offers some crushing, groovy riffs that are sure to incite a riot in the live setting. The album’s opener, “Still Echoes” is equally effective as setting the pace for the album, with the Morton/Adler guitar team firing off groovy and ferocious riffs with just enough melody (not to mention the sizzling solo at the end). Follow-up “Erase This” keeps the momentum in check and reeks of classic Lamb of God groove. Blythe himself feels a bit more energized than previous efforts, really nailing those higher screams and enunciated shouts throughout.

Is VII: Sturm und Drang as influential as the band’s best? No, but it’s just as entertaining and as fun of a listen. Based upon the events of the past few years, consider it lucky that there’s even a new Lamb of God album to begin with, let alone one as full of piss & vinegar as Sturm und Drang is. Lamb of God is officially hungry again, the metal landscape is all the better for it.