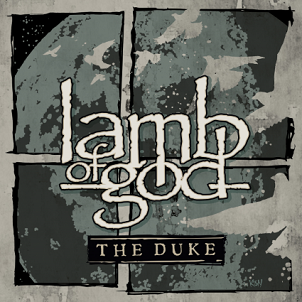 Here’s a thought: Randy Blythe should sing more often. With virtually everyone used to the man’s spit-growl antics (which, thankfully, are more listenable than they were during the band’s early days), hearing Blythe lay down some actual singing—no, not whimpering in key— is refreshing to hear. It’s far and away the most redeeming quality on The Duke EP, which consists of two new jams, and three live cuts.

The aforementioned singing appears on “The Duke,” a song written about a late friend of the band, Wayne Ford, who earned the nickname “The Duke” after John Wayne. Now, this is not the first time Blythe has actually “sung” on a Lamb of God track (see “Overlord” off of last year’s VII: Sturm Und Drang), but “The Duke” is easily superior. Here, he’s on top off on the band’s typical grooves, but unlike “Overlord,” there’s actual weight to his vocals (as in, harmonies), proving the man can ably blend clean vocals with heavy riffage. Blythe has publicly stated interest in doing more singing. Surely the band would be wise to capitalize on “The Duke.”

The rest of the EP collects a standard-fare jam (“The Culling”) and three live jams, which per their usual habit, are give or take. However, The Duke EP should be impactful because of Blythe’s singing, hopefully ushering in a new age for Lamb of God, who have long exhausted their traditional sound anyway.