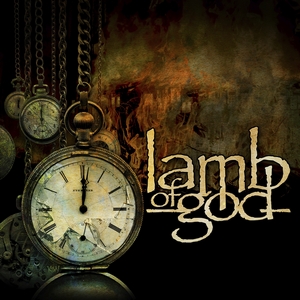 Virginia’s Lamb of God certainly require no introduction, with their ever-growing back catalog and impressive leap into the mainstream (by metal standards at least). It’s been five years at this point since Sturm und Drang rallied them with one of their strongest efforts in recent years, and the band has more or less been on the road since – along with the line-up change that gave them new drummer Art Cruz. So to put self-titled as their latest effort sees them in some ways offering fans some reassurance of the band moving forward.

Bearing the name of the band itself, Lamb of God is really all about what they has been doing since their inception. There aren’t really any surprises this time around, and it’s a consistent listen from beginning to end. For a band that you can instantly hear a few seconds and identify it as them, they’ve certainly earned the right to maintain a bit of consistency without the formula becoming sour. “Poison Dream” stands out as a solid example of this, with a familiar mid-tempo stomp going on, along with those playful LoG rhythms. But with the addition of Hatebreed’s Jamey Jasta later in the track, it really gives it more of its own flavor. The one-two combo of “Gears” and “Reality Bath” scratches the itch for that groovy swagger that the band has championed, with some excellent hooks that are sure to infect fans after a single listen. The driving “Routes” features Chuck Billy alongside Randy Blythe and is a nice, uptempo number with some thrashier elements and stands out as a highlight.

But for those who have wanted to hear some evolution, there’s some of that too. “Bloodshot Eyes” has a more melodic sense to it (along with some singing) without it shifting gears too far, and closer “On the Hook” successfully melds some vicious tempos and drum battery with atmospheric moments effectively blended in. Drummer Art Cruz doesn’t rock the boat too much on drums, but you can hear some little playful things in the background that should assure fans that he is indeed the right guy for the job, and his work on the kit stands just as tall as Alder’s has been previously.

More of a statement that the band has been successful in continuing to weather the storms that have come their way, Lamb of God doesn’t redefine the band so much as brilliantly reinforce why they have been a driving and successful force within the heavy metal genre. Their knack for melodies and groove, Blythe’s biting vocals and excellent lyricism, and punishing moments of aggression are all standing tall on this one – while still giving enough of a nod to the future to keep things interesting for the act.