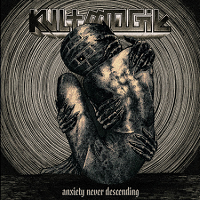 Polish for “cult of graves,” Kult Mogil in a span of a year, have already produced a demo and the album in question, their full-length Anxiety Never Descending debut. Accompanied by the band’s comment of “This record will not make dying any easier for you,” Anxiety Never Descending falls into the slipstream of uncomfortable, dicey black metal of the linear variety. The album, however, is flawed because of that, unable to produce the necessary thrust or allure that usually seeps through when working with this kind of BM.

The blend between raw and chaotic is where Kult Mogil primarily reside. The wily, if not wholly unorthodox guitar work of Karmiciel Wszy Zdrowych is something to take instant note upon the first rumblings found on the album’s opening title track. His riff pairings are searing and wild, yet there’s a noticeable sense of ambiance to them. Performed without the aid of keyboards, it’s this natural sound concoction that gives Kult Mogil at least a slight edge, even though songs like the doom-crusted “The Width of a Forehead” show the band’s ambitions and/or ideas are yet to equal their execution. (The same could be said for “Palliative Messiah,” a number that is the album’s most avant-garde excursion.)

For all its weirdness and sideways-ness, Anxiety Never Descending never quite lands the significant body blow it needed to. Predictably, though, this could be the product of Kult Mogil’s short life-span (so far) as a functioning unit. A bit too early to write off the Poles based on one album, Anxiety Never Descending doesn’t exactly hit upon the band’s claim of making dying any easier for the listener, but at least it tried.