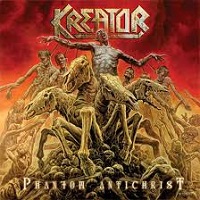 Much more fuss about a Kreator release than say, a Destruction or Sodom album. A lot of that is owed to 2001’s Violent Revolution and 2005’sEnemy of God, two of the best “return to form” thrash albums of all-time. The ensuing Hordes of Chaos (2009) tapered things off a bit, and Phantom Antichrist even more so, but at least this isn’t a jaunt back to the Endoramadays. Mille Petrozza and gang got that one out of their system a long time ago, so much so, that it’s like the 90’s (minus Coma of Souls) don’t even exist for the Germans anymore.

With top-flight producer/engineer Jens Borgen (Opeth, Symphony X, etc.) at the helm, Phantom Antichrist has a polish comparable to the aforementioned Andy Sneap-produced Violent Revolution and Enemy of God efforts. While such clarity flies in the face of the true spirit of thrash (one cannot forget how poor the band’s early albums sound), it does give extra weight to the high-intensity approach Kreator favors these days. Plus, Borgen’s expert knob-twiddling has made notoriously time keeping challenged drummer Jorgen “Ventor” Rail sound remarkably competent, as heard on the double-bass intensive “Death to the World.”

No shortage of vitriol and spite from Petrozza, even during the call to arms “The Few, The Proud, the Broken” and melodic “Until Our Paths Cross Again.” The man’s bark hasn’t lost very much bite, suiting the speedy title track and blistering “From Flood Into Fire” rather well. Beyond that, the album is a carbon copy of Hordes of Chaos, with tracks like “Civilization Collapse,” “United in Hate” and “Your Heaven, My Hell” ringing a little too close to home

. If Kreator wanted to paint themselves into a box, then they certainly have done so.

Just like Hordes of Chaos, Phantom Antichrist lacks the depth of its previous two efforts. It’s an interesting notion because Kreator certainly has the capabilities to stretch out (see: “Ghetto War,” “Replicas of Life,” and “When Death Takes Its Own Dominion”), yet the stubborn, almost brash unwillingness to deviate from the brutal thrash here is perhaps a direct reaction to how much the band faltered with Endorama. Obviously, Kreator doesn’t want to go down that road again. Neither does anyone else…