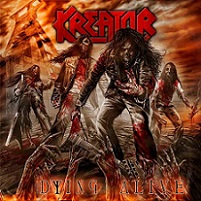 An interesting takeaway from some of the bonus footage included on Dying Alive: Kreator brings a caterer while on the road. A CATERER. Do you know how many low-level thrash bands would eat off the heel of their high-tops just to have a regular meal? It should be something for all of those bands to strive for…they could learn a thing or two from Kreator’s professionalism, not to mention stranglehold on European thrash. They are the kings, after all.

Dying Alive catches the band in Germany on December 22, 2012, a day after the world was supposed to end. Great timing, eh? The venue in Oberhausen is of the mid-sized variety, so there’s a packed house on hand, and the band appears to have gone to lengths to put on a quality production, complete with stage props, a few ramps, etc. (Only in Europe is such a feat possible.) Being that the tour was in support of last year’s Phantom Antichrist, the set leaned heavily on the album’s stalwart tracks, specifically the title track and the awesome “Civilization Collapse,” which demonstrates just how good Mille Petrozza is at left/right braining it.

Naturally, the sound is beefy and not raw, so hearing vintage cuts like “Extreme Aggression,” “People of the Lie” (the band’s best song) and “Flag of Hate” in updated form is a trip. Mille and pals can bang ‘em out like no other though, with mini-anthems reigning down all over the place, some of which are even more mighty in the live setting, like “Phobia” and “Pleasure to Kill.”

Not too much in the way of bonuses, save for two accompanying CDs that replicate the live set. Behind-the-scenes footage of the shooting of the “Phantom Antichrist” video is partially fun; so is the “Behind the Dying” segment, where the band’s crew gets their turn in front of the camera, which is where we learned of the catering. In all, Dying Alive is one those visual releases that are almost guaranteed to be good…pretty much in line with everything the band is doing these days.