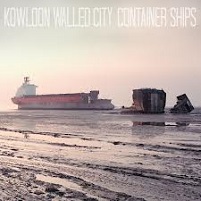 According to research, Kowloon Walled City was a largely ungoverned population in Hong Kong, where prostitution, crime, and all sorts of miscreants ran amok. The city’s population blossomed after World War II when Japan occupied Hong Kong, but was eventually demolished in 1994. The city’s eviction process was a difficult one, and reportedly, several artifacts and remnants from its inhabitants can still be found today. Given metal’s longstanding ability to recognize history, it makes sense for a band to take up the name for themselves, which is exactly what San Francisco’s Kowloon Walled City did.

Container Ships, the band’s second full-length springs for a largely obvious Isis/Neurosis combination, but with a slight industrial sludge. It’s a tentative spot to be in, for KWC never quite gets the ball rolling in one general direction throughout Container Ships’ running order. Singer/guitarist Scott Evans largely avoids the roar-me-good angle of Von Till and Aaron Turner, sounding like a more rage-induced Page Hamilton of Helmet. Evans’s vocals are easily the best thing the band has going for itself, as some of the riffs on “The Pressure Keeps Me Alive” and “You Don’t Have Cancer” wreak of thievery.

Held together by minimalism, yet unable to make any separation because of it,Container Ships is too far gone from the massive sonic brushstrokes of its contemporaries. The whole thing feels half-baked, uninteresting…just a failed composite of what has been run into the ground.