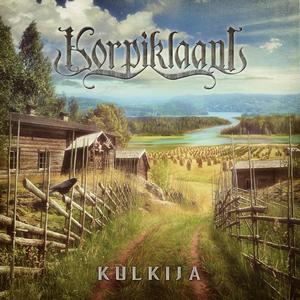 Well-established within the folk metal scene as a band that likes to have some fun with their music, Korpiklaani have built up a large discography. Kulkija is the band’s tenth album to date (in a span of 15 years no less), and while it will still please the band’s ‘drinking fans,’ there’s also a bit of maturity and growth that are elicited.

At a staggering 73-minutes in length, it’s clear that some diversity is needed. Drinking songs are fun, and the band’s cheery melodies are still at the forefront of some tracks, as evidenced by the opener “Neito” and it’s follow-up “Korpikuusen Kyynel,” but the part that makes the album shine a bit brighter (and more consistently) than other releases in the Korpiklaani line is that of some melancholy and restraint. Starting with “Aallon Alla,” and dramatically noticeable in the following ballad “Harmaja,” the band begins to explore a more introspective side. “Tutti on tie” and “Sillanrakentaja” also shine in this regard, fully utilizing a longer runtime to create a sullen atmosphere that long-time fans are still bound to dig. Of course, some more uptempo cuts are included with the usual fanfare, such as the infectious “Juomamaa,” instrumental jig “Pellervoinen,” and mid-tempo “Kotikonnut” all bound to get bodies moving without much effort. Lastly, it’s worth mentioning the grandiose, 10-minute “Kallon Malja,” which nicely balances an epic scale with heavy and mellow moments without feeling like it’s too much.

A pleasant evolutionary step for Korpiklaani awaits with Kulkija. The upbeat and fun nature of the material continues, but alongside it sits a more reserved and somber side that fits nicely with the folky nature of the band without changing things too far for fans to take. All in all, one of Korpiklaani’s strongest releases to date, successfully ensuring them some more time among the folk metal elite.