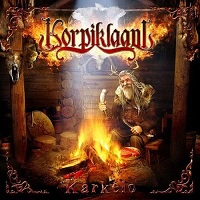 Boozing for a bruising or a cruising…it doesn’t matter – Korpiklaani are the preeminent “hummpa” metal band, Finntroll be damned. As productive as these Fins are, they regularly produce albums of worth, albeit a variation of the same variation. But that’s cool – it’s fun to get down with these guys.

Continuing with the alcohol theme that is so in focus on their prior efforts,Karkelo begins with “Vodka,” a snappy, call-and-response number with plenty of hop in its step. “Isku Pitkästä Ilosta (“The Impact of Long Joy?”)” and “Juodaan Viinaa (“We Drink Liquor”)” are joyous, thrash-laden numbers that evoke the image of beer-hall swilling and stomping, stuff that us Yanks can’t fathom.

Folk metal remains the forefront of things, however, and this is where growth – if any – is taking place in the Korpiklaani camp. Just reference the raucous “Kultanainen (“Gold Woman”)” the riff-driven “Bring Us Pints of Beer” and downright jolly “Erämaan Ärjyt.” They’re all rooted in the basics of classic folk metal, only injected with what appears to be caffeine-laced booze, if such a thing exists and are a steady improvement from their juvenile, but worthwhile early efforts.

If there was a plus to the overabundance of folk/epic metal acts, it’s that there’s a nice cross-section of bands

prowling the boards. On one end, we have our serious, well-researched acts like Suidakra and Eluveite and on the other, we have a pack of Finnish booze hounds who could probably care less about the appearance of intelligence. Good for them…pass the mead, men.