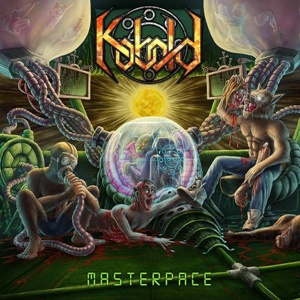 Originally known as LethaliK from 2012-2015, this Serbian thrash act modified their namesake to Kobold and released an EP and live album before issuing their first studio album Death Parade in 2017. Their back now with the follow-up Masterpace, gaining a fresh rhythm section for vocalist/guitarist Elio Rigonat to process his ideas and execute them in a varied manner – as the previous album contained fifteen tracks and rarely hit beyond the three to four-minute mark song to song. Masterpace conversely explores longer instrumental sections and arrangements, with four of the seven tracks exceeding six-minutes and change.

Dissonant chord combinations supplement the heads down speedy/crunchy riffing, allowing “Deus Ex” to be an early standout, especially given the varied growls, screams, and background gang vocal attacks along with the blackened tremolo / blast beat surprise midway through. Intertwining some down-tuned guitar tones gives the hyperactive “Ad Astra” passages much more bite, Elio laying down serious Kirk Hammett-ish wah wah proclivities even as the transition moves into a bit of a Machine Head, circular mosh movement. As a three-piece, there’s plenty of musicianship muscle to gravitate towards – Voivod-like jagged parts in the bass and guitar that allow the vocals to push outer dimensions of screams to maniacal clean melodies. Elio has that crazy madman enthusiasm to his vocal delivery that assuredly pushes the ‘love it or leave it’ category – elements of Nuclear Assault, Vio-lence, or King Diamond spring to mind for “Vertigo” and the wild rollercoaster ride of a closer “Fractured” with its Maiden to death/thrash aspects. It’s like Kobold takes measures all the way to eleven for intensity, excitement, and surprise – willingly throwing as many diverse parts as possible into the mix without forsaking the speed nature that is the staple of the band.

What does this mean overall for Masterpace and enduring enjoyment? Those who miss the early Exciter years, a bit of the early Bay Area movement, and the outside the box Voivod-ish charm should find Kobold highly entertaining.