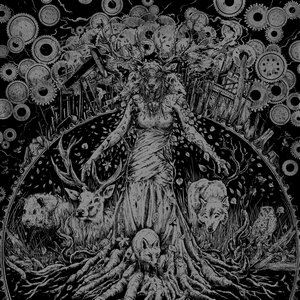 Change can be a phenomenal thing. Change driven by purpose can be even moreso. While the ecological inclination of King Apathy isn’t new by any stretch, it is nevertheless refreshing to see it so front and center to the band’s presentation. Unfortunately Wounds doesn’t move with the needed sense of purpose and while individual songs can be a good time in isolation, they readily blur together across the album’s 45 minutes.

Presented under the banner of ‘Postblack’ or some variation thereof, the moniker can’t really be said to be apt. While the post certainly rings true, Wounds shares much more in common with the waves of Isis/Cult Of Luna followers that sprung up in the wake of Panopticon all those years ago. While the melodic base is solid, the tempo rarely emerges beyond a mid-level march and frequently slows, whether to allow a thematically-linked sample to play (“Reverence”) or allow the band to exercise through instrumental passages (“Revelation Time”).

One of those rare moments is found in post-intro opener “The Scars of the Land” and follow up “Cleansing”, which marry the closest the album gets to black metal with post-rock asides and the albums favorite: the mid-paced grind. In a further tie to the older post-metal world, the vocals throughout Wounds are delivered in a hardcore-influenced shout and do not deviate from that style of delivery. While it usually works from the viewpoint of being intelligible, the lack of dynamics does nothing to counter the similar lack in the music.

Maybe it’ll come with time. The quieter moments across Wounds tend to resonate really well. The metal moments, or at least as they’re manifested here, leave something to be desired. The songs are dense and samey in content and structure (over half float in the 6-7 minute range) and in retrospect it’s frequently difficult to distinguish the high marks in one from another. Listeners proceed with caution for I’m not sure what genre fans are likely to get behind Wounds in 2019.