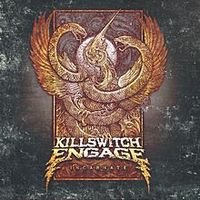 Metalcore veterans Killswitch Engage certainly need no introduction at this point. Notable in that 2013’s Disarm the Descent brought initial frontman Jesse Leach back into the band, Incarnate is the first album since where he has been involved from the get-go on a new album. This far into the band’s career, new Killswitch Engage is yet another case of a new batch of songs.

Not meant in a negative sense, as Killswitch Engage arguably blew up the metalcore sound on the rightfully acclaimed Alive or Just Breathing, but Incarnate simply maintains the same grounds that KsE has worked with for years. There’s no doubt that that they can outdo just about everyone else in the style, and the first single, “Hate by Design,” is everything that a Killswitch fan could want from the band. Galloping riffs, a soaring chorus, and a good balance of aggression and calm – the Killswitch Engage formula. They break out the metallic guns (one of Disarm the Descent’s strongest features as well) with songs like “Embrace the Journey…Upraised” and “The Great Deceit” by bringing riffs that are just as headbangable as the choruses are catchy. The three bonus tracks on the special edition also carry along in the same manner. Highlight “Until the Day” melds the upbeat and Gothenburg-y riffs with an equally strong chorus that will be hard to get out of your head. Vocalist Leach has never sounded better, truth be told, and tracks like “We Carry On” and “Cut Me Loose” give him plenty of time to shine. One does wish they’d do more vocal harmonies with Adam D though, as “It Falls on Me” gives the latest piece of evidence of how strong they are.

Incarnate does come across as more of a Disarm the Descent Part II, but that’s not necessarily a bad thing. Killswitch Engage is arguably the top of their food chain (particularly after the last putrid offering All that Remains released) and more of the same is still quite palatable when they know the style so well. An easy pick-up for fans, but don’t expect any dramatic differences from previous efforts.